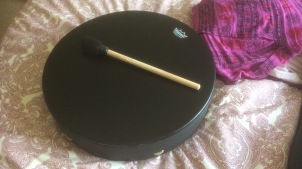 I have recently been back to a few drumming healing circles and a medicine wheel after a break of about 2 years. Normally I would be kicking myself for missing out all that time but for once, I’m not. I understand there were circumstances that have prevented me from going – a variety of them to be honest. From not having a car to not being able to face going alone plus a few emotional issues the timing just wasn’t ever right. But lately it has been and I’m happy.

I was sat at a pub with a friend one Friday evening in June and not wanting to go back home to face yet another evening alone. Somewhere in my head I was scrambling for ideas of what we could do. Then I vaguely recalled seeing there was a drumming event on that evening. I mentioned it and we quickly looked it up – yep there was a Medicine Wheel going on that evening. Total spur of the moment, we rushed to her house to get her drum then back to mine for me to change. We got to the event a tad late but nothing had properly started yet so it was okay. We both had a fantastic time that night and couldn’t wait for the next event.

Three weeks later, we went to a drumming healing circle on a Friday once again. This time it was planned but traffic got in the way and we were again a tad bit late. But it was fine – the event organiser is fabulous, laid back and very understanding. Wow what a night. Everyone seemed to be so connected. The energy was so powerful I had to step out a few times before my head exploded! That weekend I felt there’d been a shift in me. I spent Saturday just processing everything that had happened. Lots of rest for me. Sunday I felt energised and finally tackled my messy bedroom – including building a chest of drawers that had been sat waiting for 2 months!

I made a decision. I wanted my own drum. I felt I needed one of my very own. I searched around here, there and everywhere online. I felt drawn to one in particular that was in my price range. I tried to find as much about it as I could. I investigated the differences between natural and synthetic materials. I was nervous because the drum that was calling to me is synthetic. I worried about turning up with a drum not made of an animal hide. But somewhere in me the idea of owning a drum made from a dead animal just didn’t feel right for me. On the plus side, the synthetic wouldn’t be affected by humidity and moisture (something we get a lot of in the UK) but also it would have the same sound no matter where on the surface you hit it. I thought that was good for a beginner as I could just focus on the 1 tone.

Then I looked at the company’s return policy and was encouraged by how they seemed to fully understand if you don’t connect with the drum. I eventually, with the help of a friend, pressed the “Buy” button. Oops! I forgot to add a bag to carry it in! Ugh! So I slightly frantically emailed the company asking how I could get the bag as well without paying for postage again.

The next morning a lovely woman called me and we worked out the best way to add the bag to the order and how I could pay. She was very helpful. The drum arrived the next day. Okay I paid an extra £4 for 1-2 day delivery and I missed it because I wasn’t at home so had to go the next day to collect from the post office. And as I drove home with the box on my passenger seat, I spoke to the drum welcoming it into my life and thanking it for arriving. Do you think that sounds silly? Too bad. I talk to things, plants, animals, all sorts. I even name inanimate objects like the vacuum cleaner and washing machine.

I carefully unwrapped my drum once I got home. I was so excited but took the greatest care with it. The moment of truth had arrived! How would it sound? I wanted a deep bass tone as that is what I felt in my heart would be right for me. I took the banger, held up the drum and struck! Bang! Wow! Amazing! It was precisely the sound I dreamed of and longed for! I banged some more for a while just playing about really. I loved it! I am so glad that I followed my instincts and bought this drum.

Two days later and we are bonding well. I decided to look  into information on birthing your drum. I came across a site that had a lovely write up until she mentioned using a synthetic drum for healing. She claims that they are basically useless for Shamanic healing! I must confess that I was disheartened a bit at first. Had I really just bought a useless drum?

I went and had a bonding session with my drum. I played whatever beat I felt in the moment. It changed during my session. But I connected with the spirit of my drum during that session also. She is female and her name is Daphne. I just know that we are going to be good friends and are going to create lots of healing energy together. To heck with that person on the web saying she’s useless! She’s fabulous to me and that’s all that truly matters.

I am now a tad overly excited about Saturday as we are going to a Medicine Wheel at Avebury! A truly magic place full of energy. I’ve only been once and I went with the wrong person so I am truly looking forward to this event!

Where I go drumming: Chi Coffee

Where I bought my drum: Sacred Essence

I have also received the jingle bell anklets I ordered after going to the Southampton Mela Festival where I drooled over the ones the performers were wearing. I was surprised when they arrived as I only expected 1 but got 2! Double jingle! Woohoo! Here are mine:

Now I’m all set for the future of drumming circles be they healing or Medicine Wheel and of course I can play at home whenever I want! Fun times ahead 🙂

So you've found your way to my little blog now what? Well I set this up to keep friends & family up-to-date on things happening in our lives (at the moment, our being myself, & my wee munchkin aka Hoovy). But everybody's welcome :) Lately it has become a forum for my writing - a kind of therapy to replace keeping a written diary. I am finding this better as it is more open :)

Supporting you in living a life of Intention

through the darkness there is light

Maze-ing World
Gardening in the Lines

a diary of gardens.

Original musings, crafts, etc. by Psaryce because grown-ups like to play too!

WordPress.com is the best place for your personal blog or business site.