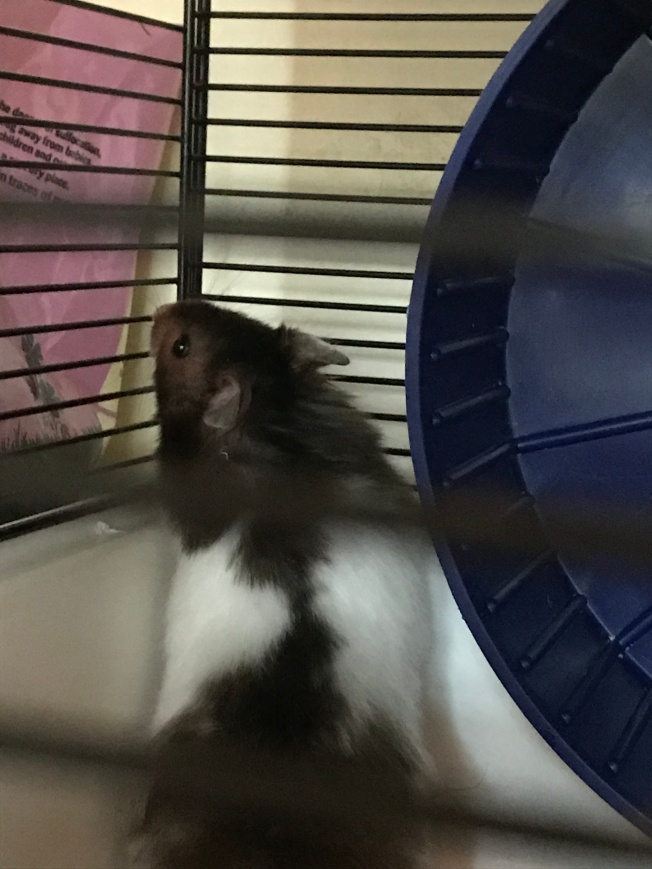 This little critter has invaded my home! He’s a Syrian Hamster and just adorable. Furgus is very inquisitive and not really shy! Here’s the back story before I talk more about him directly …

I have missed having a pet since the last rabbit (Zuri) was rehomed almost 2 years ago. I had rehomed my rabbit Dobbie due to health decling and me being unable to get down on the floor to care for her properly and regularly. Zuri was my daughter’s bunny and was rehomed when said daughter moved out. Now I know bunnies don’t make noise (unless in extreme distress) but it still felt like the house was oh so quiet with just me rattling around in it.

I thought about a cat (I am a cat person first and foremost) but with no window or door screens and living on a busy road that wasn’t an option. I’ve only had “indoor” cats so think I would not cope with wondering where my beloved was at any given time. But more my neighbour of 7 years (almost) has lost 2 cats to traffic accidents since I’ve lived here. Nope – I’m not risking that happening to a pet of mine.

I considered a small dog. I had dog-sat for my daughter a few times and enjoyed the company. But I feel I would need a dog small enough that I could pick up if it were ever injured or ill. I trialled a Jack Russell but he was too heavy and we didn’t get on well. Then I looked around some more and decided to hold off because even the rescue dogs are very expensive here (not like back home).

So cats were out as were dogs, rabbits and guinea pigs (had them and they stressed me out every morning demanding to be fed). Not keen on ferrets (mostly because I know nothing about them. Birds were a no as well – they seem like too much work plus I’d get one that squawked night and day knowing my luck. Gerbils I had as a child and decided they’d just a bit too small. Rats aren’t my thing either.

I gave up all thought of a pet for months until I saw a post for a free cage online. And it was posted by a lady I knew (not well but still). So I collected the cage and began thinking again. What would I like to live in it? The lady had kept a hamster in it and so I decided that was the pet for me! We’d had one years back, well it was my daughter’s when she was about 3 years old. Hamish his name was. He was cute.

So I started searching for rescue hamsters in my area. Blue Cross and the RSCPA websites kept showing me results for ones that were like 100 mmiles away! Ugh! I tried a few lesser know charities and no luck. I scoured Facebook sites and Gumtree along with any other site I could find. Nothing! I was surprised. It being after Xmas, I thought there’d be a few needing a new home. Sadly no.

Eventually (after a couple of weeks), I cracked and went to the pet store. There I found several to choose from (of course) along with some super sweet bunnies and guinea pigs. I debated between a Syrian Hamster and and Dwarf Hamster. The dwarf was so tiny and twee. He was also balck and white but more mottled all over. But Furgus was fluffy and set to get fluffier. Plus the dearves tend to be very fast and I thought I’d be better with a slightly slower model.

The lady packed in in a bow then another and finally another. She explained it was in case he chewede through (he didn’t). She said when I was home, to take him out of the first 2 boxes, open the third (the one he was actually in) and leave it in the cage. She said he’d eventually come out to explore his new home. Well this little varmit couldn’t wait to get out of the box! He scurried right to the opening and might have fallen if I hadn’t gotten it in the hole of the cage pronto.

He excitedly explored his new home sniffing all the time. He ignored the woven house I got for him to sleep in. He climbed the bars of the cage sniff, sniff, sniffing. He climbed up beside the wheel and sniffed it. He then started spinning the wheel from the outside while hanging on by his right 2 feet! Silly hamster! All this went out and repeated itself many times over about an hour. He then settled down for a sleep … next to the food bowl and under the water bottle! The opposite side of the cage from his house.

Late evening, he woke up and was happily running on the wheel. Clever little boy had worked it out (there wasn’t a wheel in thye cage at the pet store). Isn’t it interesting how animals seem to know how to do things yet we humans have to be taught?

He then began moving the paper tissue bedding out of the house and into the corner he’d slept in earlier! I thought “What silliness is this?!”. How could he prefer to sleep in the open when he had a nice cosy house all his own.

Well, the next morning there was no sign of him in the cage. There was a few bits of food outside hs bowl but no Furgus. He’d obviously given up on the idea of making a bed in the open corner and slept in his house. I was thrilled!

I’m going to gradually get him accustomed to me once he’s had a few days on his own in there. The cage has 3 levels but at the moment he only has access to one. I will eventually let him scale all three but one floor at a time. I have a playpen coming so that when I go to clean his cage he can roam about in it and be safe. I also intend to use it as a means of getting him used to me.

At the moment he’s eating a green bean. I had some fresh ones so sliced one open and took out the seeds as they can cause problems. I only gave a small piece so shall see how his digestive system handles it. He seems very happy with it so far though!

So you've found your way to my little blog now what? Well I set this up to keep friends & family up-to-date on things happening in our lives (at the moment, our being myself, & my wee munchkin aka Hoovy). But everybody's welcome :) Lately it has become a forum for my writing - a kind of therapy to replace keeping a written diary. I am finding this better as it is more open :)

Supporting you in living a life of Intention

through the darkness there is light

Maze-ing World
Gardening in the Lines

a diary of gardens.

Original musings, crafts, etc. by Psaryce because grown-ups like to play too!

WordPress.com is the best place for your personal blog or business site.